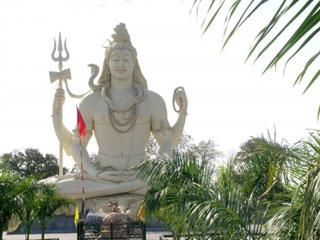 A Vijayanagar suburb of Jabalpur, famous for a 76 feet (23 m) high Lord Shiva statue which houses a cavern with replicas of Shivalingam from 12 important holy shrines of Lord Shiva all over the country.The statue is excellent work of fine art 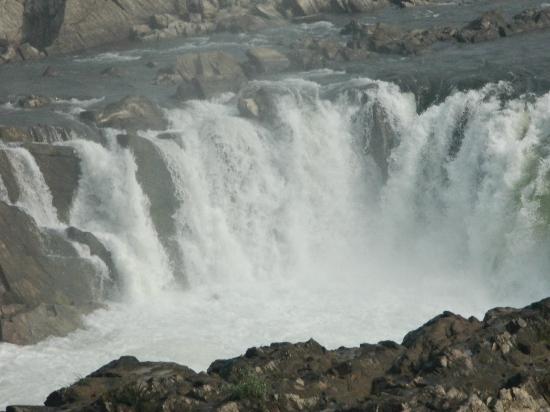 Narmada makingh its way through the marbal rocks ,narrows down and then plunges in a waterfall known as dhuandhar or the smoke cascade. So powerful is the plunge that its roar is heard from a far distance. The falls and the breaking of the volume of water at the crest present an awesome spectacle of Nature’s power unleashed 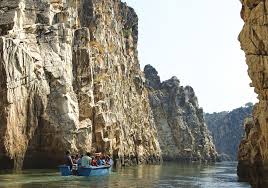 The perpendicular magnesium limestone rocks fringe the crystal clear placid waters of the narmada providing a fascination site. Boating at a moonlit night, when the whole stretch of water is transformed into a sheet of liquid silver is absolutely magical.

Bargi Dam is one of the first completed dams out of the chain of 30 major dams to be constructed on Narmada River in Madhya Pradesh, India. Two major irrigation projects, named Bargi Diversion Project and Rani Avantibai Lodhi Sagar Project, have been developed by Bargi Dam. The Narmada is the largest river in Madhya Pradesh, flowing towards the west and falling in the Arabian Sea. Its total length is 1312 km of which it covers 1072 km in Madhya Pradesh.

Balancing Rock. Jabalpur is also famous for eroded volcanic rock formations called as Balancing Rock of Jabalpur. Amazingly this rock survived even in earthquake of mag 6.5. It is said that it`s impossible to disturb their balance.

Gwarighat is a small town on the banks of the river Narmada near the city of Jabalpur in Madhya Pradesh, India. It is also associated with Guru Nanak, the founder of Sikhism.

Built by the Gond ruler, Raja Madan Shah in 1116, atop a rocky hill, the fort dominates the skyline and provides a panoramic view of the town and the country side around it.